5 Ways to Fix the Z Banding In 3D Printing

3D Printer Z Banding is one of the most common issues faced by 3D users in their 3D printing projects. Many users are wondering if there are any methods available to Z-Banding issue.

In order to fix the Z-Banding issue on your 3D printer, the Z-axis rod needs to be replaced if it has got bent, maintain the constant print bed temperature with the help of PID. Sometimes, Z-Banding is caused if the stepper motor is faulty. So, find the root cause and work to fix it.

These issues are easy to fix if you follow this article till the end. We will also give detailed information on how to apply these fixes. You can also get some other Z-banding fixing tips.

What is Z Banding?

In 3D printing, most of the issues are named after how they looked. Similarly, Banding is one such term that is named after bad 3D printing and looks like a series of horizontal bands along with the outer layer of the printed object.

3D printer Banding can be easily identified by looking at the printed object. Some objects have less and while others have severe banding structures. The image below shows thick lines with dents appearing like actual bands on the 3d printed object.

The Z banding on some printed objects looks cool as a design pattern, but majorly, it causes serious issues such as making the structure weak, rigid looking, and imprecise.

So, Z banding is not a normal phenomenon that happens in 3D printing. It’s better to look at the root causes to understand what is causing the issue. This helps with ways to prevent and fix it.

Whenever you see a Z Banding, it could be due to the below reasons:

Let’s go through the details of each of the above issues and understand the ways to fix them with a few solutions:

How To Fix Z Banding in 3D Printer?

In order to fix the Z banding issue, you would have tried many tutorials or methods and found a solution that would have worked for you. Whether you have or don’t have a solution, we hope that the below methods will be useful to fix Z banding issues.

Z Banding can be fixed by following the below things:

First, check if Z Banding is uniform or offsetting. Based on the pattern, the solutions will vary.

For example, if the 3D printer wobbles or if the rods don’t have even movement then the Z banding appears in a certain fashion.

Sometimes, the 3D Print Banding is due to the layer shifting in a certain direction. If the Z-Banding is happening only on one side, then the layer on the opposite side should be offset.

If Z banding in 3D Printer is caused due to variations in layer heights and print bed temperature, then you might see a Banding that appears uniform and equal throughout. In this scenario, layers get wider in all directions as compared to the previous layer.

In the above video, the poor Z-carriage bracket case which holds the brass nut is highlighted. If there are any manufacturing defects in the bracket, then it will not be a perfect square which leads to Z Banding.

Also, ensure that the brass nut screws are not fully tightened.

These Yotino Flexible couplers are compatible with many 3D printers including Creality CR-10, Makerbot, Prusa i3.etc. The couplers are made with aluminum backed by great craftsmanship in order to remove the stress between motor and drive parts.

Flexible Couplers can be used to stop the Z-banding. You can buy from Amazon here and with no doubt YOTINO Flexible coupler is a great product. 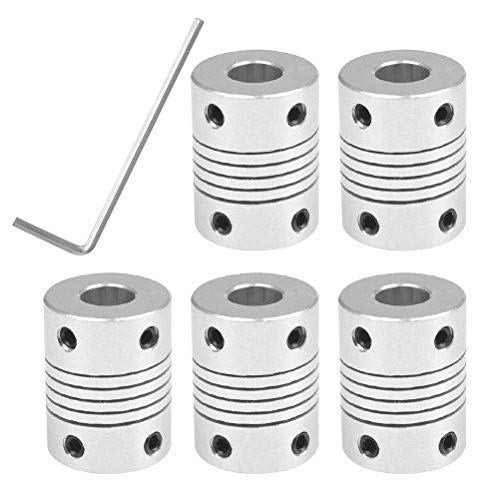 2. Set the Layer Heights to Half or Full Step:

3D print Z Banding is sure to happen if you set incorrect layer heights for the Z-axis of your 3D printer.

So if you set layer values less than these half or full steps of the motor, then the motor will switch to micro-stepping. The problem with micro-stepping is that the movements are not precise as they want to be.

So, micro-stepping can be avoided by using the half or full-step values of the stepper motor that controls the layer height.

As an example, the Creality Ender 3 Pro has its full step value of 0.04mm. If you want to avoid micro-stepping, then print only in layer heights that can be divided by 0.04. Example values can be 0.2mm, 0.16mm….and goes on. These are the magic numbers to avoid micro-stepping and Z-Banding. On the other hand, they also prevent uneven movements in the Z-axis.

Another major cause for Z-Banding is the varying temperature in the print bed. You can try using adhesives or tape or better print without a heated bed and see if Z banding stops. If Z-Banding stops, then the issue is caused by temperature fluctuations.

There are 2 methods of heating the print bed

It works by heating the bed to a set temperature, once it reaches a set point heating will stop. This causes the bed to get cooled till a certain extent.

When the bed temperature hits the lower setpoint, again the heater will start and heats up to a higher set point. Because of this, the bed undergoes cooling to a certain extent.

This is one of the features integrated into the marlin firmware to stop wide temperature fluctuations.

The video below explains how PID heating works:

Temperature control is one of the crucial features of 3D printers. Today’s firmware offers an elegant way of managing heating. Firmware determines how much power to send to the heaters by looking at how large the difference between the actual temperature and setpoint is. How long the actual temperature has been off from the setpoint and how quickly the temperature is changing at the moment.

These 3 factors make up the Proportional Integral and Differential parts of the PID loop.

On the other hand, PID is not an intelligent system on its own, you need to give PID Values as a set of Kp, Ki, and Kd values.

Finding PID values annually is difficult and may not get accurate PID loop values. Thus the marlin firmware has implemented a feature called PID Autotuning. It is an easy and effective way of finding Kp, Ki, and Kd values.

So the basic command for autotune is M303 and executing it will set the values. So, PID can maintain the temperature as consistent throughout the printing process.

The Z-axis of the 3D printer consists of the threaded main shaft which rotates moving the extruder assembly. If these roads are not straight, then their movement causes wobbling and destroys the print quality. Sometimes, the bearing at the top and bottom that holds the Z-Axis rods might be faulty causing the Z banding issue. So, there can be a series of problems that cause the Z-banding issue.

So identifying the root cause can fix the Z-Banding problem and save your prints from negative quality.

As a troubleshooting step, first, check the bearings of the Z rods and see if they are at fault in their movements.

Next check the Z-axis rods if they are straight or not. Most of the rods are not straight so be careful.

Sometimes, the hole in the bearings where the Z-axis rods sit gets widened due to prolonged usage creating extra space for unwanted side-to-side movement.

So, when the rod rotates, it also creates side-to-side movement and causes the layers to get misaligned. This results in Z-Banding.

Adding to this, if the plastic bushings of the extruder carriage are not aligned properly, then it furthermore increases the vibrations and uneven movements.

In this case, the replacement of Z-axis rods and bearings with quality bearings and hard rods is essential. If you have a plastic extruder carriage, then better to get it replaced with a metal one for more precision movements.

If your 3D printer consists of 2 Z-axis rods, then check for the synchronization between them by rotating one of the rods by hand.

Z nut also plays its part in Z-Banding. If you see that the Z nut is slightly high on one side, then bring out the equal angle on all sides by slightly loosening the screws on all 4 sides. This prevents unbalanced movements.

5. Check The Rails and Bearings Of Other Axes & Print Bed:

During a Z-Banding problem, generally, Z-axis components are rigorously verified for their perfectness. Apart from Z-Axis, the other axes components can also contribute to Z Banding. So check if the bearings and railings on the Y-axis are working fine or not.

Perform a shake of the hot end and see if there is any movement gap. Usually, there will be a slight gap/movement, but if you see large looseness, then some components are not accurate and are faulty.

Do the same test for the print bed too. Shake the print bed to check for any looseness or random gaps. If you experience any such, then align the bearings and other moving parts accurately.

As an example, in the LulzBot Taz 4/5 printer, the Z banding can be eliminated by using this Anti Wobble Z nut mount.

So again, the Z-banding is also dependent on the printer design. If the Z-axis contains high-quality rods and bearings that can move it precisely, then Z-Banding can be eliminated.

We hope that any of these above tips will help you fix the Z-Banding issue in your 3D printing.

A Detailed Guide on Glow in the Dark Filament