How To Change & Load Filament On Ender 3 & Ender 3 Pro

Most of the 3D users will be looking for how to change the filament on Ender 3 & Ender 3 pro-3D printers. Changing filament on a 3D printer is important and needs to be done correctly. This guide helps one to do that correctly.

While changing the filaments a host of issues might come up including the filament getting stuck requiring external force to pull out, problems in replacing the new filament after the old one is removed and print quality degradation after the filament replacement.

So if you are looking for a step-by-step process of how to change filament on an Ender 3 3D printer, keep reading below:

How To Load Filament On Ender 3 & Other 3D Printers

Loading of filaments for printers such as Ender 3, Ender 3 Pro, and others can be done in simple steps as below:

To set the nozzle temperature, follow the below steps:

Once the nozzle is heated to the melting temperature of the filament, press the extruder lever and release the filament handle.

Now pull the filament from the back of the extruder and remove it fully.

Once you remove the old filament, the nozzle gets free and it is ready to accept the new filament. Before loading the filaments on Ender 3, Ender 3 Pro, Anet, and Prusa sharpen the filament end and do an angle cut. Use the Flush Micro Cutter to do it. This enables the easy penetration of the filament through the extruder and nozzle.

Once you make a cut, the filament can be inserted into the extruder and pushed gently until some resistance is felt. This is an indication that the filament has reached the nozzle end.

Once you remove the old filament, store it properly in an air-sealed container box. Also, put the filament end into the hole that is in the side of the filament spool. This prevents the loosening of the filament on the spool and moisture penetrating inside layers.

How to Change Filament Mid-Print on Ender 3, Ender 5 & Other 3D Printers

When this is the case, it is important to pause the current printing, change the filament and continue printing with the new filament. Although it is a simple process, if done properly, it can lead to great print quality.

To change the filament mid-print on Ender 3, hit the pause button on the control screen. Ensure not to press the stop button as it stops the print completely resulting in an incomplete print.

Hitting the pause button causes the printer’s Z-axis to get raised slightly and this enables it to be pushed to the home position. Now you can pull out the filament from the extruder.

Remember not to preheat the print bed as it is already heated and the printer is in mid-print condition. You just have to simply remove the filament and load the new filament as per the above method.

Once you change the filament mid-print, allow the printer to extrude for a small interval before hitting on “resume print”

Make sure that all the previous filament remnants are extruded out from the extruder and hot-end before resuming the print.

You can make use of Cura software to mention the exact point of pause and accordingly, the printer pauses when it reaches that point. Now you can replace the filament with the new one.

Go through the below video to understand how to change filament mid-print on Ender 3 and other 3D printers.

Most modern 3D printers such as Ender 3, Anet, Prusa, and Anycubic are supplied with filament runout sensor which pauses the printer when the filament is over (Ender 3 for example).

The filament runout sensor also stops the printing process if the filament gets stuck due to some reason. 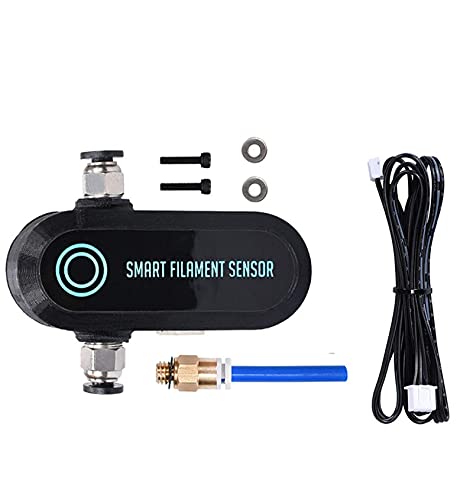 While there are some other printers that won’t stop even when the filament is over. This is because they lack the filament runout detection sensor.

In the absence of a filament run-out sensor, the printer will continue moving its print head until the last sequence of the model without extruding any filament. This produces a print that is incomplete and filament run-out can also clog the nozzle passage.

Some of the ways to prevent this problem are to install the filament run-out sensor or ensure enough filament is available on the spool.

If you think that filament will get over in the middle of the print, better to change it when some filament is still left out. Slicer Software also can calculate and tell you how much filament length is needed to complete a print.

To conclude, filament changing is important and needs to be done on time. If it is not done properly, it can cause incomplete print.

Does PLA Absorb Moisture? How to Prevent It?