Do PETG, ABS, PLA Filaments Melt in a Car / Sunlight? 

People wonder if PLA, ABS, or PETG objects will melt when used in cars during scorching sunlight. At times, the temperature inside the car gets very high and the filament should have the heat-resisting capability to withstand it.

We have written this blog to give clear answers for the 3D freaks and analyze if having 3D prints in a car is feasible or not.

Will PLA Melt in a Car After 3D Printing?

The melting point of PLA objects ranges from 160-180 Deg C. PLA has a low heat resistance as compared to all other filaments used in 3D printing space.

The glass transition temperature of the PLA filament is 60-65 DegC, which defines the temperature at which the solid PLA becomes a softer but not melted state.

Usually, the environmental temperature in any place around the world won’t reach 60-65 DegC unless the place has a too hot climate.

But the problem begins when the PLA object is placed inside a car.

3D Printed PLA melt in a car as soon as the temperature reaches 60-65°C. This is because the glass transition temperature of PLA is 60-65°C. In locations where sunlight is heavy PLA melts in the car, especially during the summer season.  PLA should be okay to use in cooler climates

One user has printed sun visor hinge pins with PLA filament and used them in his car and they are not exposed to direct sunlight. But after a day, they got melted completely even though the outdoor temperature was just 29DegC.

The internal heat will go up if car has black interiors because black absorbs more heat.

Can 3D Printed ABS Parts Melt in a Car?

ABS is a filament that needs a high printing temperature in the range of 220-230°C to melt and print it. More importantly, the glass transition temperature of the ABS nears to 105°C which is very high and even more than boiling water.

So ABS can easily withstand the heat inside the car because the internal heat would never the melting point of ABS material.

So, ABS won’t melt in a car due to its high heat-resisting capability and glass transition temperature. So internal heat inside a car would never go beyond 60-70DegC even in extremely hot climate locations. So ABS usage inside a car is possible.

ABS is also sensitive to UV radiations from the sun. When ABS is exposed to direct sunlight from sun its color will get changed and becomes brittle. However, ABS undergo much of negative effects and sustains its stability.

One 3D user used ABS printed part in his car and it lasted for more than a year. After 1 year, the model broke into two parts. When each of these parts is inspected, both of them got affected only for a few millimeters and got broken in that exact location.

However, ABS is not beginner-friendly and it needs a high nozzle and bed temperature. Thus one needs hands-on to work with a strong heated bed and high-temperature extruder.

If you are able to successfully print with ABS, then it can be a great choice for car usage because of its UV resistance and high glass transition temperature (105DegC)

If you want to use ABS in direct sunlight, then use ASA which is similar to ABS but has strong UV-resistant properties and direct sunlight can’t harm it.

Can PETG Parts Melt in a Car?

PETG is suitable to be used in the car because of its high melting point of 260DegC and high glass transition temperature of 90-100°C. This makes PETG highly resistant to heat and direct sunlight when compared to other filaments.

The strength of PETG is slightly low when compared to ABS & ASA but PETG has good resistance to direct sunlight and offers long life.

If your climate temperature reaches 40 DegC then you cant use PETG in cars in those areas. Because the internal heat raises above the glass transition temperature of PETG and gets softer.

While choosing PETG, opt for higher glass transition temperature(90- 95°C) filaments. This increases their resistivity to the heat.

Which is the Best Filament For a Car?

The Polycarbonate Filament (PC) is the best filament to use in a car due to its high heat resistance and UV resistance. Polycarbonate is capable of withstanding very high heat with a glass transition temperature of 115DegC.

If you want to buy Polycarbonate(PC) filament, then Polymaker Polylite PC is the best. It is available on Amazon with a lot of good reviews praising its high heat resistivity, light diffusion, stiffness, and strength. 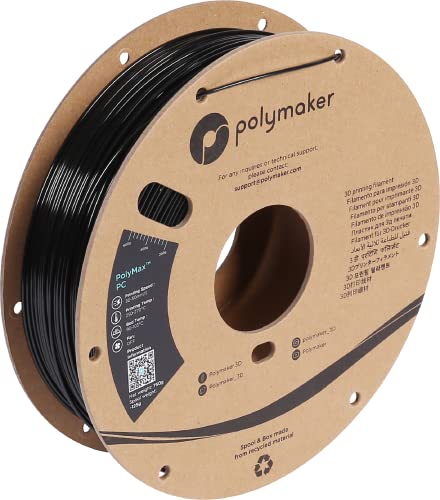 Polymaker Polylite guarantees its dimensional accuracy of +/- 0.05mm which is 97% for a 1.75mm filament.

Overall, Polycarbonate filament withstands heat and sun radiation irrespective of the season. Thus, it is highly preferred in applications that require a high level of heat resistance.

Polycarbonate filament is the strongest of all 3D filaments with high durability and amazing qualities.

How to Increase the Heat-Resistance of 3D Printer Filament?

The heat-resisting capability of a 3D printed object can be increased by taking it through the process of Annealing. Annealing means heating the 3D object to a fairly high temperature so that molecules get re-arranged resulting in more strength. It is usually done using an oven.

Annealing causes the 3D print to slightly shrink and increases its strength. If you want to increase the heat resistance of PLA, then the object needs to be heated above its glass transition temperature of 60DegC and less than the melting point of 170DegC

Below are the steps to be followed:

Josef Pusa has shown this process in his video as linked below. Check it

PLA when annealed, produces much better results as compared to other filaments like ABS & PETG.

If you anneal the model, design the model dimensions accordingly as the process shrinks the model a bit.

How about Annealing for PETG and ABS? Many 3D users say that Annealing won’t work for ABS & PETG because of their complex molecular structures. However, can slightly improve their resistance.