The Creality CR-6 SE is an improved version of Ender 3 V2 with more features and offers stable operation. One can quickly set the printer to function upon unboxing. Read our detailed review below: 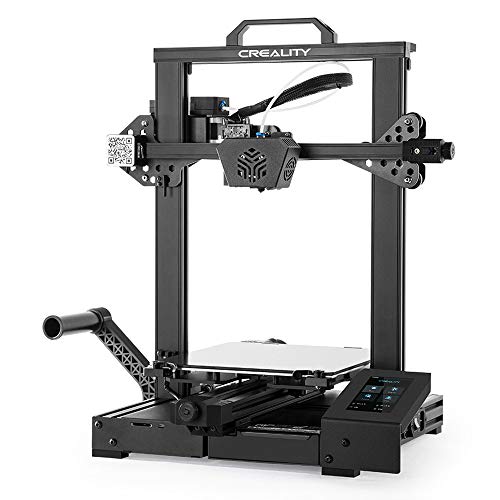 As a first, the Creality CR-6 SE gives consumers the professional aesthetic that defines the 3D printer brand.

Owners need not be troubled about the machine being damaged during shipping because it is well wrapped.

This 3D printer does not need much maintenance and churns out excellent prints, assembles in minutes, and has a low price. For most users, that’s good enough to buy one!

The majority of Creality CR-6 SE’s are factory assembled and do not take much time like with the early Ender3.

BangGood is the best place to get a Creality CR-6 SE for the best price. Comgrow offers comparable pricing, however, their inventory can be low at times.

What comes in The Package?

Along with the printer, the following accessories are included in the packing box:

The following items are stored on the SD card of the Creality CR-6 SE:

The factory-assembled components of the 3D printer make assembly a breeze. As per the the Creality CR-6 SE review, user-friendly pictograms are given in the instruction booklet to get the printer assembled in minutes.

The following are the individual steps in the assembly process:

It comes with a lot of important features. As a result, this list is pretty lengthy!

A high-power Meanwell power supply is included with the printer. The sole disadvantage of this power source is that it becomes noise as the load increases. And sound is raised with rise in temperature, especially if one started at a high temperature.

From setup to initial printing, the Creality CR-6 SE review did not show any issues. Pushing filament from the filament sensor through the extruder was the only thing that didn’t function right away.

The dual Z-axis is an important function of this printer

Most budget 3D printers come with a single Z-axis and are notorious for their instability, appropriately called as “Gantry sag”.

As per reviews given my many users, this 3D printer achieves great stability as a result of the double Z-axis. This helps produce highly precise and repeatable outputs than using a single Z-axis.

The phenomenon of “z-wobble” affects many 3D printers with only one Z-axis.

The structure is so shaky here that the Z-axis vibrates as it moves, causing different types of printing mistakes, such as ringing and ghosting.

According to the review, noth Z axes are linked up with a toothed belt to keep the 2 stepper motors of the individual Z axes in sync. This ensures that the stepper motor is not moving faster or slower than the other.

This 3D printer’s design as per the review,  was created from bottom to top to reduce as many problems as possible for consumers. This is apparent in the automatic leveling of the bed, which is also quite simple to set up.

One doesn’t have to focus on perfect angles or put hundreds of parts together like a jigsaw puzzle.

This 3d Printer, like many standard 3D printers, has an extremely stable frame. The frame is held together by a few screws, although the print bed rarely requires leveling again.

Everything will be steady if the screws are correctly tightened. The robust construction of this machine coupled with the Twin Z-axis helps in the stability of the machine. The gentle movement of the print head through the toothed belt nearly eliminates any kinds of vibrations.

The review found that incorrect timing belt tension in 3D printers can quickly lead to a variety of printing issues. Shifting of Layers is a frequent occurrence.

This can be avoided by correctly tensioning the timing belt. Make sure they are neither loose nor too tight.

The timing belt tension on many 3D printers, such as the Ender 3, is complex and inconvenient.

It’s no surprise that many Ender 3 users have purchased this upgrade to make the process easier.

The Creality CR-6 SE has a handy tension wheel that is workable on both belts. These wheels allow one to speedily and accurately control the tension of the timing belt. This comprehensive update is unquestionably a good choice in terms of enhancing the durability of the belts.

The Creality CR-6 SE review shows the 3D printer is extremely quiet, because of the TMC2209 stepper motor and 32-bit silent main board.

Other 3D printers from Creality are frequently upgraded using these two components.

A standard feature of this model is that the ultra-quiet stepper motors from Trinamic ensure the silent operation of the 3D printer.

Besides the motors, the cooling fans are the most common source of the noise. During the initial test print, or perhaps when the bed was already level, one observes that the 3D printer was incredibly silent.

During operating, just the fan can be heard. One of the quieter types has a built-in fan.

As per the review, the color 4.3-inch touchscreen has a smooth dark finish and is touch-friendly. The primary interface is straightforward. The most critical variables like hot end temperature and print bed are prominently shown.

The following four submenus are accessible from the main menu.

The first thing one does with low-cost 3D printers is to replace the standard nozzle.

Cheap nozzles come with chips inside or are improperly shaped. The Creality CR-6 SE nozzles, on the other hand, have the standard Creality quality.

The quality standard is also fulfilled by the two provided extra nozzles.

One nozzle can last a long time if it is always cleaned properly and rarely makes use of filaments like wood and carbon or wood which are highly abrasive.

The print bed is not height adjustable and is permanently attached to the machine’s base.

When the nozzle meets the print bed, strain gauges in the 3D printer detect it. After that, the Z-axis movement is abruptly halted.

Because fixation does not modify the print bed alignment, this measurement technique is quite accurate and only needs to be repeated once or twice.

From the touch screen menu, automatic leveling can be quickly initiated. Ensure that the nozzles are properly working.

The process can then be started by the push of a button. Everything else happens on its own!

In other models of 3D printers from Creality, the extruder is frequently replaced with a more powerful one.

There’s no need to change the extruder in this printer because it already has a improved and latest one.

Unlike cheap 3D printers, extruders are not entirely made of plastic. Metal components are present.

This ensures that the filament is under enough strain and that wearing out is minimal. Metal filament guides also make working with flexible filaments easier.

It just looks stylish, in addition to the benefits of the new design. The technically correct parts are carefully positioned around the nozzle’s bright red heatsink.

It has a very attractive and modern appearance as a result of this.

The bundled parts can be easily replaced thanks to the innovative hot-end design. This allows you to; for example, use one hand to replace the nozzle.

This benefit is especially obvious when it comes to maintenance.

Replacing certain components and getting the print head cleaned entirely is easy now, due to the revolutionary design.

With careful cabling, disassembling the entire print head is simple.  Just one connector links the cables that feed the hot end. The hot end is equipped with two fans.

The hot end is cooled by one of the fans, while the print product is cooled by the other fan. Cooling is adequate and does not pose a concern at this time.

When the temperature rises, the fan gets a little louder. The filament is supplied by a PTFE tube that goes quite deep inside the heat sink.

PTFE begins to produce hazardous gases at around 250°C. It might theoretically be possible to go a bit over 260°C, but due to the gases released, using lower than 260°C temperate filaments is appropriate.

This consists of most of the commonly used filaments such as TPU and PLA.  When printing at higher temperatures, such as PETG, ABS, or ASA, the tubing must be replaced by a high-temperature one.

The adjustable filament holder on this device is maybe the most modest but yet useful feature. It can be positioned anywhere along the horizontal frame.

Except, perhaps where the vertical frame is installed. It can also be slanted 90 degrees to conserve room while the printer isn’t in use.

The Creality CR-6 SE 3D printer’s base is securely linked to the print bed.

It is flatter than the paper clips used to hold other glass plates, and there is no risk of the nozzle colliding with it. Thus, this glass plate installation is much more convenient.

Because the print bed is fixed in place and cannot move on its own, leveling is substantially simplified.

On most low-cost 3D printers, there is no permanent adjustment of the four screw buttons. One won’t have to worry about uneven print beds with the addition of automated leveling of the bed!

The print bed is heated to 60-70 ° C in as little as 2-3 minutes. The tenacity of the print bed power wire to bend is exceptional.

It entirely absorbs the Creality CR-6 SE’s movement, ensuring that the cable does not break. The adhesion to the glass plate is excellent.

Many other 3D printers, especially those on a budget, require the use of various tools to make the printing plate stickier.

Hairspray, Blue tape, and glue sticks are just a few examples. For Creality CR-6 SE, there is a PEI bed.

At high temperatures, adhesion is good, and even massive objects with small contact surfaces can adhere. You may easily remove anything from the glass plate once it has cooled.

This function is already commonplace, and it provides safety when there is power loss or other power failure.

Carrying your 3D printer is simple thanks to the handle on the top of the frame. This feature is not of any consequence if one will not be moving the printer.

Inside the Creality CR-6 SE 3D printer is a little drawer to store tools. All of the tools may be kept, making the work surface appear neat and tidy.

If one is not using the printer for a long time, put the tools in the drawer. It is incorrect to place the tool back in the drawer, if one needs to start a new print every day or if your 3D printer is always on. But, of course, it’s a matter of personal preference.

This feature, as also the printer’s futuristic design, contribute to a polished appearance.

The Creality CR-6 SE printer has the following technical parameters:

The Creality CR-6 SE has a similar feel to a beefed-up Ender 3 V2.

The standard print quality is excellent, and the minor details combine to create a somewhat more premium experience.

The auto-bed leveling on this device is reliable and consistent, and the new extruder is simple to use. It may be a bit sophisticated for beginners.

The Ender 3v2 makes for a good budget go-to printer if one needs a decent beginner printer that prints well with little trouble.

Yet, if one wants something comfortable, or appreciates owning unusual and unique items, getting the Creality CR-6 SE is justified.

How Good Should be Your Computer for 3D Printing?