The Creality CR–10 Smart is one of the popular model from Creality built with an intelligent to offer innovative 3D printing experience and advanced performance. Read the detailed review.

The brand new Creality CR-10 Smart 3D Printer is one among them. Creality has come up with a combo system. 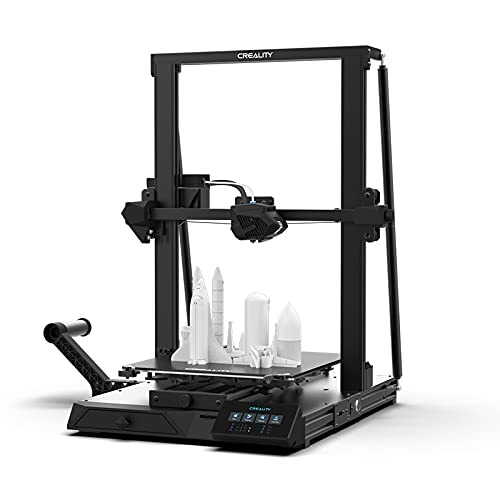 By taking the acclaimed but slightly older visage of the CR-10 series with the sophisticated design and user interface of the CR6 SE.

Wi-Fi connections, Automatic bed leveling, and even remote control and slicing via the app offer a significant upgrade. This makes it very popular among the bigger 3D printer models.

Let us check out the key features of the Creality CR-10 smart:

Because of its volume and inexpensive price, the CR line is quite popular, and the current CR-10 is no exception.

One can expect practically any print to fit this big machine.

The Creality CR-10 Smart features diagonally positioned double support struts, as is customary for the CR-10.

The cross brace, unlike earlier generations, is located on the back of the printer.

Even if one didn’t realize the struts were in the way in the old CR-10, this little redesign provides one easy access to the build bed.

The benefits of these cross braces are obvious. It gives the frame more rigidity, less vibration, and shaking. Also, it provides a smooth print, especially at high altitudes.

This design style has been shown to improve Z-axis uniformity in the past. The Creality CR-10 Smart 3D Printer ensures smooth vertical movement of the Z-axis.

The Creality CR-10 Smart’s offers automatic leveling of the bed. It thus eliminates the need to manually level the platform on a sheet of paper.

It is assumed Creality employed this arrangement on the CR6 SE and that testing has proven it to be quite good.

The days of utilizing an SD card to transfer data from a computer to a printer are gone.

Very astute. In the past, Creality (eventually) bid goodbye to the building block that was attached to it, the control unit—a task that had been put off for a long time.

For the Smart, Creality has gone with the CR6 SE design. It has added a 4.3-inch color touch screen with an angle that fits snuggly into the printer base.

One can not only lower the printer’s footprint but also use the new intuitive user interface by just tapping the screen.

Creality’s own 32-bit quiet motherboard powers the printer. This guarantees that everything runs well and that everyone gets along.

The screen will go off and save power if the user doesn’t do it manually within 30 minutes, according to Creality.

Some of Creality CR-10 Smart’s extra features are as follows:

Two Z lead threads are coupled to a Z sync belt that keeps the lead thread adjustment in place on the Creality CR-10 Smart. But, the system can be incorrectly built and come with a crooked X gateway.

The right side of the X-Gantry, in particular, can be higher than the left, resulting in a discrepancy of nearly 1 cm.

One can level the gantry after releasing one of the connectors and rotating the lead screw until everything works properly.

A newbie cannot print if the printer had arrived in this condition.

The twin Z bracket on the back of the Creality CR-10 Smart is a fantastic addition to the printer.

These mounts improve the printer’s stiffness and do away with the problem of Z-wobble.

This is a problem that plagues most large-format Cartesian printers. Especially when producing large-format models, thanks to its increased Z-axis.

The Creality  CR-10 smart hot end is still lined with PTFE. It can print up to 240 ° C using the standard Creality process. Beyond this, the PTFE tube will begin to break down and produce dangerous gases.

Although PLA, PETG, and even ABS are adequate, there I was hoping to see a fully metallic heat break.

This avoids the need to replace the PTFE hose on a regular basis while also allowing one to reach higher temperatures safely.

The hot end is certainly a more interesting change in Creality CR-10 Smart. It’s not a Creality hot end that one will find on other machines.

Instead, invest in a new heatsink. Because of the improved heat transmission between the heatsinks and the heat break, it should be significantly better at cooling the heat break.

Furthermore, the broader fins aid in heat dissipation. A 4010 radial fan with a duct that severely restricts airflow is used to cool the parts.

Due to the fan’s poor cooling effectiveness, the printing speed on smaller models is limited. On larger models, though, it works perfectly.

One would like to have a couple of 4010 type fans to help cool down the print objects, or even a 5015 fan to force more air out on the model, as usual.

The Creality CR-10 Smart, like the Creality CR6 SE, makes use of a stress sensor to detect minor movements when the nozzle comes into contact with the bed.

The nozzle works as a probe with this sensor and may automatically level the printer. The nozzles are heated to 120° C and begin probing the bed at 16 places when the leveling procedure begins.

For consistent results, each point is probed three times; however the probe speed is perhaps the slowest one has seen on a 3D printer.

It takes roughly 3 minutes to complete the investigation. A couple of LED lights illuminate the model from the X start position. But they aren’t bright enough to genuinely be of any help.

One can purchase the same sort of extruder as on the CR6SE. It’s only one gear, but the job gets done anyways.

Sure, the twin gear extruder is definitely better and more precise. But one can’t really complain because it’s superior to the old plastic extruders seen in less expensive machines.

One can enjoy how simple it is to load the filament as well. Simply “open” the extruder with a little lever, enter the filament, close the lever, and begin printing.

The Creality CR-10 Smart offers an auto-leveling system for the print bed. This enables the bed to be positioned beneath the table without the use of a leveling button.

To promote adhesion, the heated aluminum bed is covered with a glass printed surface with a rough surface.

One cannot stick anything to the printed surface without using pressure glue, unfortunately.

Two front levers can be used to remove the printed surface of the glass.

The printed part of the glass should be pushed beneath these two metal brackets on the rear to keep it in place.

If the bracket was shipped deformed, it cannot be returned to its former shape. Fortunately, the bed is securely fastened, but this is yet another QC flaw that hasn’t been addressed at the factory.

A useful drawer for storing accessories is located on the front of the printer.

The Creality 2405 V1.2 board comes with a TMC2209 silent stepper driver for electronics.

It’s also worth noting that the board is powered by an ARM STM32F103 RET6 processor.

The board has all of the stepping drivers soldered to it. If one of them stops working, the entire board must be replaced.

The power wire is tinned in a typical Creality technique, which can lead to future safety issues.

It is recommended that the tinned end of the wire be cut off and the bare wire be firmly attached to the terminal, in case it cannot be crimped with a wire clip.

The 6010 24V fan is in charge of keeping the board cool. This is a bit larger than one wants and yet it is a good option.

g. Connectivity with LAN or Wi-Fi:

Because of the integrated Creality Box within the machine, the Creality CR-10 Smart has a “Smart” name.

It connects to the printer board through WLAN or Creality Cloud’s LAN port for use.

The Creality CR-10 Smart additionally contains a power relay that may shut down the printer when it is finished producing.

This option can be found in the touchscreen menu. When enabled, the printer will wait for the hot end to cool for a few minutes before shutting it off.

i. Touchscreen of 4 Inches:

The Creality CR-10 Smart features a redesigned touch screen. One may receive a capacitive touch screen at times. This is a significant advancement over the previous resistive film touch screen.

The UI has also been entirely revamped from the previous screen. While it appears to be well-designed, it is still incomplete and unintuitive.

It’s uncommon that one operates a Creality printer without running into a firmware problem.

And the Creality  CR-10 Smart takes home the prize for the most firmware bugs on Creality machines.

The first issue one may encounter is when one is about to begin printing the model.

When one slices the model and copies it to the SD card as usual, the printer may refuse to recognize it.

It is discovered that the only way to refresh the screen is to reset the printer with the SD card installed after some trial and error.

The files did not appear on the screen after one removed and reinserted the SD card.

The next problem is when one starts printing.

One can notice a random movement of the nozzles travelling swiftly along the sides of the print.

Before it returns to the original location to resume printing on each print. This revealed some unusual threads on the model’s exterior wall.

One can opt to re-flash the printer with the most recent firmware.  This can resolve the second issue, but the files still won’t load without rebooting it.

The Creality CR-10 Smart’s power supply is a Creality CHP35024 device, which is quite similar to the MeanWell device seen in other machines.

This could be a rebranded power supply, but one is not sure. It works nicely and the fans aren’t particularly large.

Following are the specifications that make the Creality CR-10 smart:

Based on the specifications, appearance, and features, the list price of $499 is fantastic. Also considering the delightful experience one had with other CR-10 printers or the CR-6 SE.

Q. What are the Creality CR-10 Smart’s settings for Cura 4.9 or printer settings?

Q. Is there a USB port bundled with the Creality CR-10 Smart, or is it a build-to-order option? Is there a way to use Octoprint along with the CR-10 Smart 3D Printer in any other way?

A. The Creality Wi-Fi BOX easily connects to the Creality CR-10 Smart’s USB port to control operations and printing.

Q. What temperature is optimal for PLA? What types of materials can be printed with the Creality CR-10 Smart?

Q. Is it possible for me to utilize Octoprint? What is the best way to install Octoprint on a CR-10 Smart?

A. Check out the tutorial on the blog: https://damsteen.nl/blog/2021/04/24/connect-creality-cr-10-to-computer-or-octopi and YouTube Tutorial:  https://www.youtube.com/watch?v=09r3qBKuWiE

Q. Is the CR-6 SE the same? What is the distinction between the Creality CR-10 Smart and the CR-6 SE?

A. Yes, the leveling type and appearance are the same as the CR6 SE. Power protection, Wi-Fi connection, touchscreen, Twin Z-Axis, and more come included with the CR-10 Smart.