The Photon Mono SE from Anycubic  is a resin based 3D printer. This machine can print at a high speed while maintaining excellent print resolution and quality.

Existing users of this printer find many functions very likeable. The Anycubic Photon Mono SE is an admirable printer in every way, from design and appearance to operation and performance. One can be confident that it will meet most 3D printing needs.

Buyers are also astonished by how affordable the printer is. Go through our detailed review on Anycubic Photon Mono SE Resin Printer below.

The Mono SE 3D printer from Anycubic has some excellent features as described below:

a) Monochrome LCD with 6″ 2K Resolution

The recently introduced monochrome LCD has good thermal stability. It can print over 2,000 hours, which no previous LCDs could sustain. 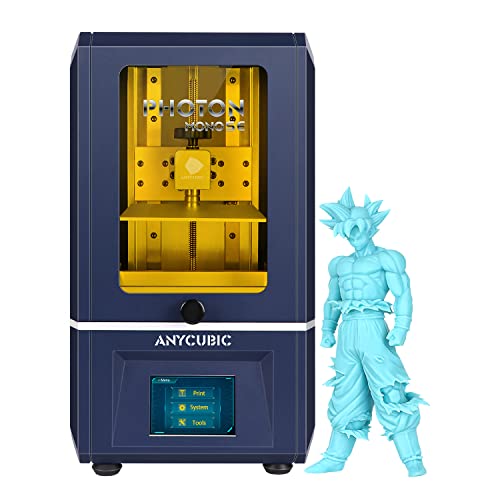 The Anycubic Photon Mono SE has a huge monochrome LCD. Thus, the exposure time is higher due greater amount of light passing through.

As per Anycubic, if the time of exposure is 1 second, the 3D printer works twice or thrice as faster when compared to traditional 3D printers.

Normally the Mono SE takes a couple of seconds to print a layer as compared to more than 7 seconds required by non-monochrome printers.

Previous Photon Series models can only print at 60mm/h. The Anycubic Photon Mono SE prints at an incredible 80mm/h.

This 3D printer has an incredibly simple interface that lets even novices get started quickly.

One of the most appealing aspects is the ability to control devices remotely via the app. This simplifies the process greatly for customers.

The Wi-Fi connected app allows owners to change print properties, and control and manage their printers. This is achieved with users not requiring to be near their devices.

f) Leveling of Bed Made Easy

The Anycubic Photon Mono SE’s bed leveling technology is significantly easier to use and can be completed in a couple of steps.

Click the “Home” button and adjust the screw tight enough and that’s it. No other complex technique or method involved.

Anycubic Photon Workshop is an in-house developed slicing software. It works well with the Mono SE. Yet, some users prefer to use other specialized alternatives.

Photon Workshop has functions similar to the ChiTuBox app. Such as object modeling, punching holes, and hollowing.

As an alternative option, use the ChiTuBox or Lychee Slicer application. Most slicer applications are specialized to particular file types. Hence, users may need to import the STL files from another program into the Photon Workshop. This should allow the printer to identify the print file.

The Lychee Slicer has updated their file saving capabilities to function well with 3D printers from Anycubic like the Mono X.

Twin linear rails, a stepper motor, and clearance nut combo add support to the Z-axis of the Photon Mono SE.

These supports enhance the Z-Axis’ stability and performance during motions. This lowers the chance of layer displacement.

A power source that provides a constant and secure flow of electricity can help one print smoothly.

Anycubic ensured that the power supply for the Mono SE is of the best quality, so one can count on it even after extensive use. The Power Supply has three types of certifications; CE, UL, and ETL.

It can be difficult to get 3D prints to adhere to the build platform in some circumstances.  Yet, a brushed metallic surface made of aluminum delivers better adhesion on the print bed. Anycubic has included a surface with pre-installed markers to help resin prints adhere better.

The Mono SE incorporates fans that are installed over activated filters of carbon. These provide protection from intense odors emitted by the resins.

The printer also includes a couple of internal fans. These help keep all kinds of particles including dust, out of the gaps between layers.

Users will need replacing the filters of carbon after a while because they will not last indefinitely.

This is not so difficult thanks to the easily accessible Anycubic design.

Let us compare the specification of the 3 Anycubic models. That is the Mono, MonoX, and the 4Max 2.0 Pro

List Price:
New From:
Out of Stock
Buy from Amazon.com
4

Following are the parts that come bundled in the Anycubic Photon Mono SE package from Anycubic:

According to one Mono SE user, the feeling after finishing the initial 2 prints was fantastic. One is wowed by the amazing quality and focus on intricate printing.

The ability to get an exposure period of only 1.5 seconds seemed so farfetched. Yet, the Mono SE accomplished it.

One of the primary features that users appreciate is how simple it is to set things up. Unlike earlier, there is no need to assemble the printer bit by bit and make it fit.

As compared to other 3D printers such as those using FDM print technology, putting together the Mono SE is so smooth. This printer was considerably easier to use, according to a user, and it came already constructed.

To get started, all he had to do was take out the machine, get the safety foam out of the way, and plug in the power connection.

The speed is always brought up when discussing this 3D printer and people’s experiences with it.

Users like the printer’s quick print speed and accuracy. They claim that the level of precision and details is far greater than in earlier Anycubic Photon models, and even higher than in many other 3D printers.

The innovative screw arrangement for quick leveling is such a big help. One of the users expressed satisfaction with the solitary screw bed leveling solution. A lot of time was saved thanks to this and the prints turned out beautifully.

It’s a nice feature that’s often ignored.  To be able to level only one area without having to conduct more testing or not knowing if it’s actually leveled.

List Price:
New From:
Out of Stock
Buy from Amazon.com
9

To Buy or Not – Reviewing the Anycubic Photon Mono SE

Anycubic is a reputed brand in the 3D printing space. They are constantly working to build the greatest 3D printers. So that they can provide ease of use to their valued customers.

As previously mentioned, the Mono SE has a plethora of impressive qualities and attributes. These make it a worthwhile buy for anyone seeking to have the greatest 3D printing experience using resin.

How Good Should be Your Computer for 3D Printing?